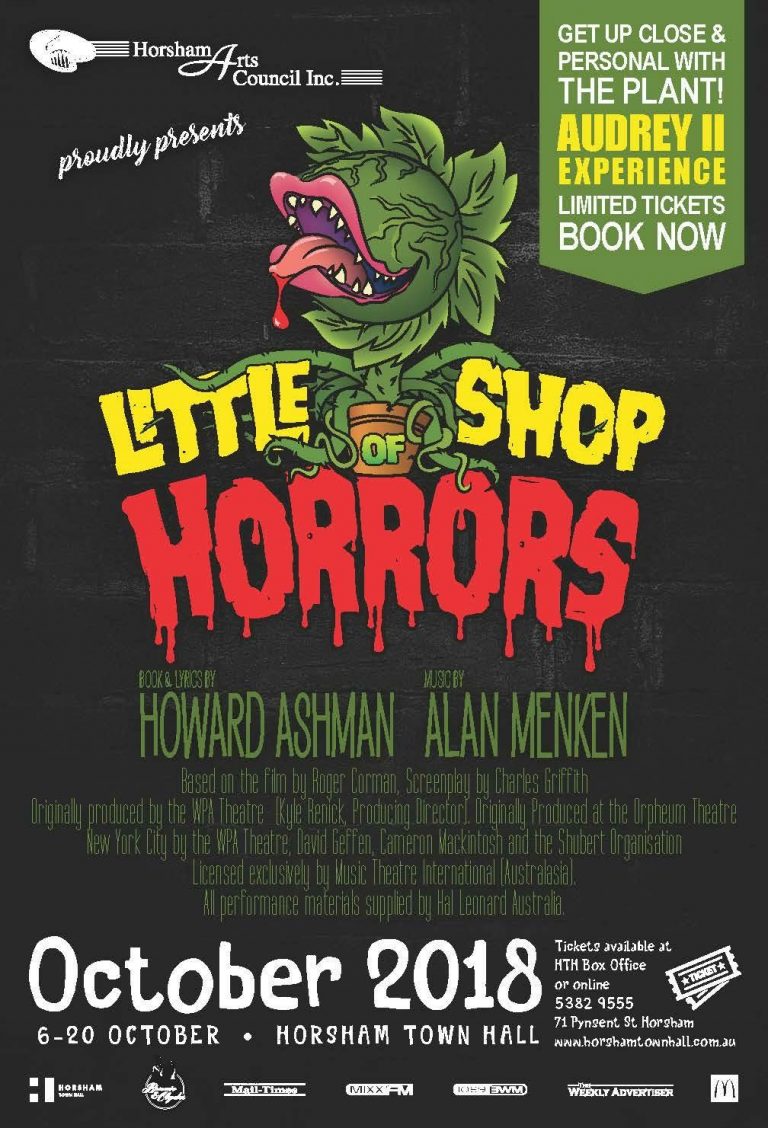 Act one
1960 is a difficult year for Seymour Krelbourn. Brought up by a man named Mr. Mushnik, Seymour is an orphan and an outcast. Living on urban Skid Row, he works at Mushnik’s Skid Row Florist (Prologue: Little Shop of Horrors) alongside a poor battered young woman a few years older named Audrey.

She enters the shop one morning with a black eye that her date has given her. After waiting from 9 til 5 for customers, all of Skid Row shares their feelings (Skid Row). At closing time, Mr. Mushnik decides to close the shop to save himself from the grief of Skid Row life. But Seymour comes up with a plan to save the store. He shows a strange and interesting plant he has collected which he has named Audrey II after his secret love for Audrey. When he puts this in the window, customers flock and he tells the story of how he found the Audrey II (Da-Doo), during a total eclipse of the sun.

After staying open a few extra hours for the amazing new business and showing customers away, he offers to takes his two employees, Seymour and Audrey, out to dinner. But at the last minute, the Audrey II suddenly wilts and Seymour is commanded to stay at the shop and nurse the plant back to health. He begs the plant to grow (Grow for Me), and accidentally feeds it blood after getting poked with rose thorns. When he realizes that the blood is what the plant wants, he decides that he must feed it, but only a little, because if he is successful, perhaps Audrey will like him.

Seymour’s famous now and has his first radio interview. When Mr. Mushnik and three street urchins, Ronnette, Chiffon, and Crystal, listen to the interview, they have a grand realization (Ya Never Know). Audrey misses the interview because her boyfriend had her handcuffed. And she really loves Seymour but feels that she is unworthy of him because of her past.

She dreams of Seymour and her having a family one day someplace nice (Somewhere that’s Green). Mushnik’s Skid Row Florist finally has money to clean up their act (Closed for Renovation) and the Audrey II is the size of a German shepherd. Audrey and Seymour are left alone and come close to revealing their true feelings for each other, but her date is almost there. So when Orin Scrivello finally arrives, he meets Ronnette, Chiffon, and Crystal. He reveals that he is a sadistic dentist (Dentist). When Audrey has gone off on Orin’s motorcycle, Seymour thinks about some advice that the high Orin gave him. He is told to ditch Mr. Mushnik and to go to the big time with amazing trapped plant. Mr. Mushnik overhears this and makes a plan to adopt Seymour and therefor own the plant.

The plan is to kill Orin, feed the plant, and keep Audrey for himself. Orin makes a special emergency midnight appointment for Seymour who bears a revolver. But Orin plans to operate on Seymour and enjoy it with some nitrous-oxide for himself, not for Seymour.

Act Two
The strange disappearance of Orin has made Audrey a free woman. And Mushnik and Son Skid Row Florist is abuzz with business.

Afterward, Audrey starts crying. Seymour reveals his feelings for her and Audrey does the same (Suddenly, Seymour). Mr. Mushnik sees them together after closing, he puts pieces of the puzzle together. He knows that Seymour killed Orin, after all, he was called down to the police station for questioning. But the plant is hungry, so Seymour reluctantly feeds Mr. Mushnik to the plant (Suppertime). Now the plant is as large as a car and has two giant thorny “arms.” Seymour has been offered the cover of LIFE magazine and other money deals. Again, he reluctantly accepts. After all, Audrey wouldn’t like him if he was poor, he thinks (The Meek Shall Inherit).

One stormy night, Seymour is typing a speech and the Audrey II screams for food. What else can Seymour do but go to the butcher’s shop to buy some beef. He cannot bear to feed another person to the plant. While he’s gone, Audrey, who lives across the street, can’t sleep and goes out to take a walk when she hears a voice in the shop. When she sees the plant, she is aghast. The plant wants some water and she uses the can. The plant tricks her and eats her. Seymour comes in at the last minute to save her, but she is dying. He confesses that he fed Orin and Mr. Mushnik to the plant, and that he never meant to hurt her, and she forgives him. Seymour hates the plant and tries to kill it. But the plant eats him, despite his attempts. The plant eats and eats and eats.